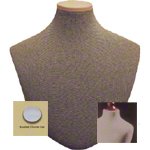 Tie bust is used to display all kinds of ties